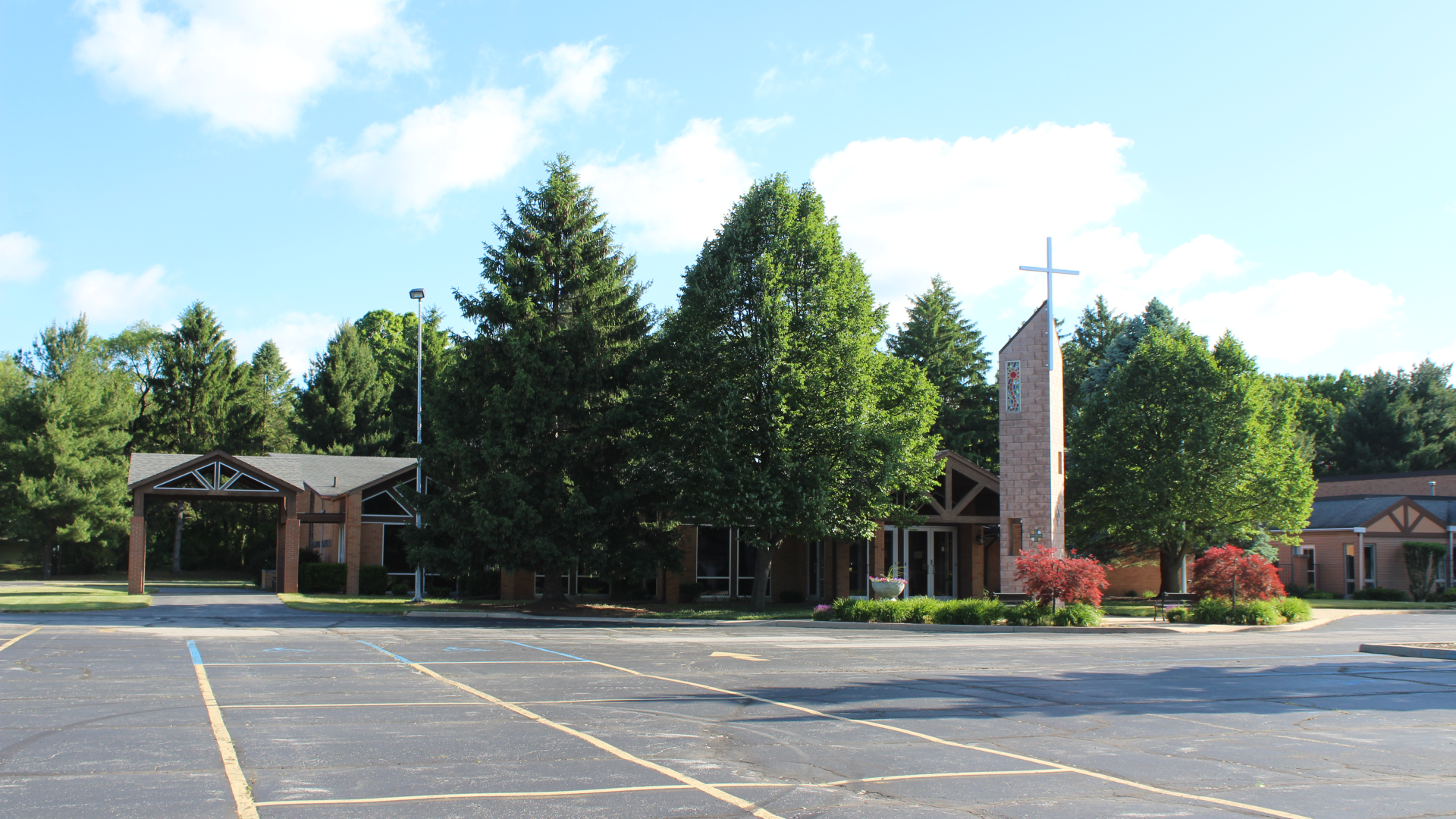 On Sunday afternoon September 22, 1957 in the rectory of St. Anthony Parish, Msgr. Bernard Kearns, Chancellor of the Archdiocese of Detroit met with Rev. Hugo Noetzel (pastor of St. Anthony) to discuss the establishment of a Mission Church in the Village of Temperance.  Fr. Noetzel was given the responsibility to locate a suitable temporary location to be used for the celebration of Mass on Sundays.  The location he chose was the Rotary Hall at Carr’s Park in Temperance.

On November 9, 1957, Fr. Edward D. Popielarz from the faculty of Sts. Cyril and Methodius Parish in Orchard Lake, Michigan was appointed assistant to Fr. Noetzel at St. Anthony and then assigned by Fr. Noetzel to celebrate the two Masses at the Rotary Hall, relieving Fr. Berg from further service.

The Archdiocese of Detroit notified Fr. Noetzel on November 14, 1957 that the official name for the Mission was to be Our Lady of Mount Carmel.  (Other names that were considered were: Our Lady of the Holy Rosary and St. John Vianney.)

On March 28, 1958 Our Lady of Mount Carmel was given the status of autonomous mission attached to St. Anthony and Fr. William G. Hunt was appointed administrator.

Ground breaking for the church (at its current location) took place on August 17, 1958.  Actual construction started on August 22, 1958.  The first Mass in the new church was celebrated at Midnight, December 25, 1958.  Despite the fact that there was no heat, there were 380 in attendance.  Mass was also celebrated that Christmas morning and every Sunday thereafter, while construction continued during the week.  On June 7, 1959 Archbishop John Dearden solemnly blessed the church and offered Solemn Pontifical Mass.

Effective April 13, 1960, Our Lady of Mount Carmel Mission was raised to parish status by decree of Archbishop John F. Dearden and Chancellor Bernard Kearns.  The parish boundaries were established at that time.  On April 20, 1960, Fr. William G. Hunt was officially appointed first pastor of Our Lady of Mount Carmel Parish.  In October of 1964, Fr. Leo J. Smith arrived at Mount Carmel to assist temporarily in the parish during Fr. Hunt’s illness.  That temporary assignment lasted eighteen years!

In 1965 the parish property was increased to 20 acres with the acquisition of an additional 7 acres.  In 1966 the parish purchased a house adjacent to the rectory to be used as a residence for Extension Society Volunteers and later to become a convent.  The first Extension Volunteers to serve the parish were Rita Travaglione, Delores Grover, and John and Mary Jo Overbeck.

Ground was broken for the future school on December 4, 1966.  School opened in September 1967 with 56 students and staffed by two Dominican Sisters, Sr. M. Clement and Sr. Marie Jonathan.  In 1968 Sr. Juanita became principal and also directed the CCD program.  In 1969 Sr. Juanita was joined by Sr. Linda Kelly.  The school remained opened until 1970 when it was closed because of a lack of funds and a lack of religious to staff the school.

In 1979, Fr. Hunt retired and Fr. Smith was installed as pastor.  Also, that year, Sister Beverly Hillis, OSF, became a member of the Parish staff.  It was during Fr. Smith’s tenure, the church was renovated following the guidelines of Vatican II and the religious education program for students of the parish grew and was recognized as one of the most successful in the archdiocese.

In 1980, Fr. Hunt died of a massive heart attack in his Florida home.  His body was returned to Michigan for memorial services and for internment.

In 1993, Sister Aloise Paluszak, OSF joined the parish staff as Director of Religious Education.  In 1997, Sister Pam Nosbusch joined the religious education staff and took over direction of the junior and senior high school programs.  Sister Aloise retired in June of 2005.

In July of 2004, Fr. Daniel Nusbaum came to the parish after retiring from 39 years on the teaching staff at Mount St. Mary’s College in Maryland and spending a year on temporary assignment in Wyandotte, Michigan.  On Sunday, September 19, 2004, Fr. Dan was officially installed as pastor of Our Lady of Mt. Carmel. Fr. John M. Currin joined the staff as Associate Pastor of Our Lady of Mount Carmel, January of 2008. After four years of service, Fr. Dan retired in June of 2008.

Fr. Stephen Rooney was appointed pastor to Our Lady of Mount Carmel Parish effective July 1, 2008. He served for 13 years as pastor of St. Michael the Archangel Parish in Monroe, Michigan. Fr. Rooney served as the Vicar for the Monroe Vicariate for eight years, ending his term in October 2009.

On July 1, 2009, we bid a fond farewell to two members of our staff. Fr. John Currin, our Associate Pastor, was assigned pastor of St. Aloysius in Romulus, and our Pastoral Associate, Mrs. Hazel Destatte retired after 23 years of faithful service.

April 13, 2010 marked the 50th Anniversary of our parish. Archbishop Allen Vigneron celebrated a Mass of Thanksgiving on April 12, 2010. After the Mass, a reception was held in the parish hall. Charter members of the parish were recognized and given an Our Lady of Mount Carmel chaplet from the parish.

July 1, 2010, Rev. Sama Muma was assigned as Associate Pastor to Our Lady of Mount Carmel.

Our former pastor, Fr. Dan Nusbaum celebrated his 50th Anniversary of Ordination with us on Sunday, July 10, 2011. A light reception followed Mass in the parish hall.

Charter parish member, Martin Selmek became the second Permanent Deacon from Our Lady of Mount Carmel. Deacon Marty was ordained Saturday, October 6, 2012 at the Cathedral of the Blessed Sacrament in Detroit by Archbishop Vigneron. We are fortunate that Deacon Marty was assigned to our parish. A welcome reception was held for him on Sunday, October 7 after the 11:00 Mass.

Rev. Robert Slaton, ordained on Saturday, September 30, 2012 was assigned as our Associate Pastor, and began ministering to the people of Mount Carmel on Monday, October 15, 2012. A welcome reception was held for him after all of the Masses the weekend of October 20/21, 2012.

November 2012 brought changes to the church. The glass partition that separated the church proper from the Narthex area was removed. Pews were extended into what was the Narthex. It is estimated that we gained seating for at least 60 people. A few of the pews in front of the altar area were removed, easing congestion for communion, weddings and funerals. The choir was relocated to the northwest corner of the church.

The pews and kneelers were reupholstered in May of 2013. What was thought to be a 2 week project, ended up taking a week longer. The condition of the foam padding on our pews was far worse than anticipated. Daily Mass was held in the parish hall while the pews were recovered.

July 2013 brought sad news to OLMC. Our pastor, Father Stephen Rooney, and our associate pastor, Father Robert Slaton were being transferred to Our Lady on the River in Marine City, Michigan. On Sunday, July 14, 2013 a Mass of Appreciation was held for Father Rooney and Father Slaton, followed by a farewell reception in the parish gymnasium.

On August 1, 2013, we welcomed Fr. Don LaCuesta, as pastor to Our Lady of Mount Carmel Parish.

Fr. Daniel Nusbaum, our former pastor, entered eternal life on Thursday, November 9, 2017. Per his wishes, his body was cremated and only a Funeral Mass was to be held, with his good friend, and former student, Fr. Edward Seton Fittin, O.S.B as the presider.  Because of Fr. Seton's busy schedule, the funeral Mass for Fr. Dan wasn't celebrated until Saturday, December 16, 2017. There were several priests in attendance, including our new Regional Bishop, Bishop Gerard Battersby.  A funeral luncheon was held in the parish gymnasium after the Mass.  Fr.. Dan had a life-long love for Temperance as well as Our Lady of Mount Carmel Parish, so it was fitting that his cremains were buried in Our Lady of Mount Carmel Resurrection Cemetery.